The Making of a Bharat Ratna

Lessons from the Life of Pandit Bhimsen Joshi 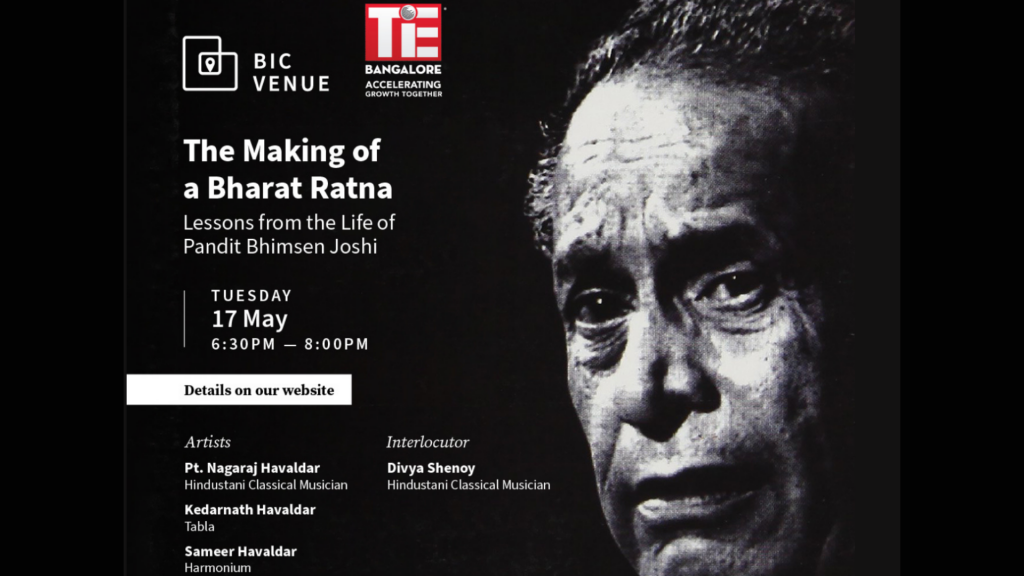 In this Birth Centenary year of our Bharat Ratna, Pt. Bhimsen Joshi, join us for an insightful conversation with Pt. Nagaraj Havaldar, a leading Hindustani Classical Artist and a “grand” student of Pt. Bhimsen Joshi.

In his recent book Pt. Havaldar captures not only the musical brilliance of Pt. Joshi, but also his hard work, dedication, perseverance, positive attitude, and more. These traits, which we commonly call as 21st Century Skills are very critical for success in any field, especially for all us as entrepreneurs and professionals, to a great extend.

You can register to join the session at the physical BIC venue by visiting bit.ly/bicvenue1705 or you engage virtually by registering on the button

Dr. Nagarajrao Havaldar is a performer, composer, orator, author all in one very unique confluence creativity. Endowed with a rich voice, his music can conqueror the hearts in no time. He holds a Masters degree in History and archeology, with a gold medal. His Ph.D is on the topic, the Historical development of music in Karnataka with special reference to Wodeyars of Mysore.

Dr. Havaldar was trained by Pt. Madhava Gudi a direct disciple of Bharataratna Pt. Bhimsen Joshi in Kirana Gharana. Pt. Panchakshari Mattigatti imparted the nuances of Jaipur Gharana to Dr. Havaldar. His achievements are many folds, but here are some quick highlights.

* He has done an audio CD for NIMHANS Bangalore for children with behavioral problems. * Sang at Tihar Jail for the inmates as healing session.

* Dr. Havaldar has composed and sung the entire Bhagavadgita 18 chapters in Kannada, by tuning them in 64 ragas.

* Has been a visiting performer and professor to USA, UK, Canada and other countries. * Has authored two books on Bharataratna Pt. Bhimsen Joshi, contributed over 200 articles for various magazines and universities.

* Has given Lecture demonstrations and motivational speeches on Music as friend for wellbeing, to many corporates within and outside the country.

* Dr. Havaldar has performed in all major cities and music festival in India. Among the many awards and honors, Karnataka Kalashree, conferred by Karnataka Sangeeta Nritya Academy, Govt of Karnataka is the latest one.

Omkarnath Havaldar is fortunate to be born between two Tanpuras. His father Dr. Nagaraja Rao Havaldar, mother Sudhamayi is a fine arts graduate. Since the early age of 4 Omkar has been initiated into classical music. He has been trained by his fathe, also had the fortune of learning from Pt. Madhava Gudi and Pt. Panchakshari Swamy Mattigatti who were his father’s gurus. Right now he is fortunate to be learning from Pt. Indudhar Nirody the doyen Agra Gharana. Omkarnath holds a Masters Degree in Hindustani Vocal Music.

* Has travelled extensively in USA and UK for concerts and teaching.

* He has been a prolific teacher training students within India and abroad.

* Has visited Afghanistan, China, and Hong Kong to propagate our music.

Swara Matha Laya Pita is the dictum of Indian Classical Music. As a younger son of Dr. Havaldar, Kedarnath chose to express his music through Tabla. His initial training in vocal music has shaped his accompaniment to suit the nuances of Khayal Gayaki. Kedar was trained by Pt. Rajgopal Kallurkar and Pt. M. Nagesh for 10 years. Presently he is under the tutelage of Pt. Samir Chatterjee. Kedar’s stay in New York under the true Gurukula System of learning has given deeper insight into all aspects of Tabla.

He has performed at

Sameer Havaldar hails from a family of musicians. His first guru was Pt. Prabhudeva Salimath in Talikoti. Sameer’s father Sheshacahala is a retired Professor of History, used to sing Kannada light music and also an approved Kannada cricket commentator. Sameer’s uncle Dr. Havaldar is a noted Hindustani Classical Vocalist and a scholar. Sameer is a graduate in Psychology and holds a Masters Degree in Mass Communication and Journalism.

Sameer is approved artist from All India Radio and Doordarshan for devotional music. He has been teaching Hindustani vocal and harmonium since 8 year. Sameer is teacher for Hindustani Vocal department at SIFF Young Artist, an organisation for performing arts – vocals, dance and instrumental music. Sameer is also doing

video editing for The Raaga Room, a series of interviews of various artists from all over the world interviewed by Smt. Deepa Joshi.

Sameer is continuing his vocal and harmonium learning under his uncle Dr. Havaldar and Pt. Panchaksharaiah Hiremath respectively. He is also learning western accordion from Accordion Prakash and western Piano from Gautam Shenoy.

Sameer is a most sought after harmonium accompanist for many artists. He toured performed all over India, UK and USA. Some of his major performances are

* Sameer is an integral part of Dr. Havaldar’s writing both in Kannada and English helping him to collect the information and process the same into the book / article.

The young Havaldar trio of Omkarnath, Kedarnath and Sameer is a popular team in great demand in the younger generation.